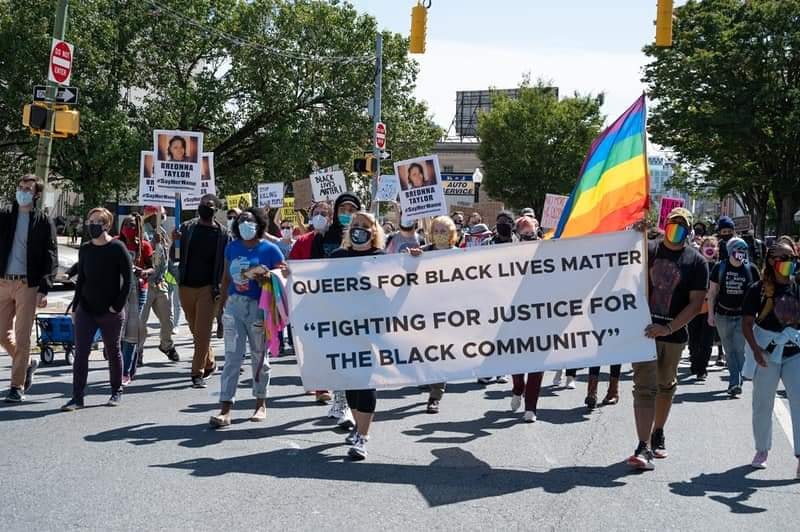 Z. Zane McNeill (25) is an independent scholar and queer animal activist living in Baltimore, Maryland, United States. He has published on topics such as speciesism, cisheteronormativity, animal rights, anti-carceral veganism, civil litigation, labor, and structures of white supremacy. In this interview, Zane talks about becoming vegan, why he uses the pronouns he/him and they/their and the challenges and discrimination he faces as a disabled neurodiverse person in the animal rights movement. He also explains the term he and Julia Feliz coined,‘cisheteropatriarchal speciesism,’ and offers some strategies for reaching total liberation.

Hello Zane, tell us who you are? What’s your background? Where do you live?

So, I am an independent scholar-activist based in Baltimore, Maryland originally from Morgantown, West Virginia. I was raised by an ecofeminist and grew up being taken to strikes and anti-war protests. In high school, I became involved in animal rights activism and environmental justice. I have a BA in history and a MA in Political Science and have worked with the Humane League, the UN Refugee Agency, the Humane Society of the United States, the American Society for the Prevention of Cruelty to Animals, and the Animal Legal Defense Fund. My professional background is in grassroots outreach, public policy, and government relations but I am currently consulting on DEI issues (Diversity, Equity and Inclusion), helping folks from marginalized communities navigate academia, and freelance writing on issues connected to labor, queer liberation, and consistent anti-oppression. I recently co-edited a collection with activist Julia Feliz called Queer and Trans Voices: Achieving Liberation Through Consistent Anti-Oppression and have anthologies forthcoming from PM Press and Lantern Publishing.

How long have you been vegan? What inspired you to become vegan? And how did you become involved in animal activism?

I’ve been vegan for over a decade now. Not eating animals for me was almost a spiritual choice – that every animal had a spirit that I had no need to take – but after going vegan, I also learned more about how factory farms and speciesism are entangled with environmental racism and degradation, misogyny, ableism, white supremacy, cisheteronomativity.

Your e-mail signature mentions the pronouns he/him and they/them. Can you explain?

I’m a genderfluidflux trans guy which means that sometimes I feel like a dude, sometimes I feel like both genders, none, or even female sometimes. They/them pronouns are usually seen as neutral and many nonbinary people use them. I usually prefer he/him pronouns. I’ve been out as nonbinary since 2016 and lived as a trans guy for about a year and a half. I’ve socially transitioned and am starting to consider medically transitioning. I’m about four months on low-dose testosterone, but am considering stopping or keeping my levels where they’re at currently. Being nonbinary for me makes transitioning difficult, because there’s no ‘end’ exactly. I pass as a guy about a third of the time, but usually don’t get gendered at all by strangers.

You also told me you identify as disabled. Can you share your situation and how it influences your life? What are your specific challenges?

I struggle with Post Traumatic Stress Disorder (PTSD), generalized anxiety disorder, panic disorder, crippling dysphoria and am self-diagnosed with autism and borderline disorder. I also have scoliosis which causes me continual neck and spinal pain and makes standing for long periods of time difficult. Being neurodiverse not only makes it challenging for me to have the so-called ‘spoons’ to work within the capitalist, neo-liberal structure of labor but also makes communicating with neurotypical people difficult. Hiding my neurodiversity is exhausting and having to translate for neurotypical people puts unnecessary labor on me. I also have to usually do introductory courses in a work space on trans and queer issues / oppression and power and equity / neurodiversity which leaves me feeling chronically fatigued. That, plus having to navigate often unsafe neoliberal spaces, has made it difficult for me to work in nonprofit spaces.

Hiding my neurodiversity is exhausting and having to translate for neurotypical people puts unnecessary labor on me.

You have an education in sociology and political science. Was there any attention paid in the courses to critical animal studies? To queer studies? To disability studies?

In my BA, I majored in history and minored in Sociology. I took a few ‘woman in history’ courses, but I primarily took courses on subterranean politics, revolutionary politics, and the Commons. In my MA at Central European University in Budapest, Hungary I was able to take more courses in the Women and Gender Studies department. One of my good friends was a disability activist in that department, whom I learned a lot from. However, I have primarily learned Critical Animal Studies and disability/crip studies from my friends through writing collaborations. Reading Eli Clare’s work, introduced to me by my friend Rebecca-Eli, was transformative for me.

You are currently working on a collective guide on how to do activist scholarship/be an activist scholar. Some people however claim that scholars need to take a ‘neutral’ stance, and do research ‘objectively’. What’s your take?

I also am currently working with my colleague and friend, oral historian Matthew Sparks, on building a consulting and editorial company to help aid and empower activist scholars. The only reason that I have continued to work inside/outside of academia, is because I believe in praxis. The theories on power and hierarchy that I study inform my daily activist work. The writing and research I do I make accessible in order to reach and engage with marginalized communities without higher degree. So much of academia is elitist and bound by gatekeeping/ers. I am working to dismantle that. I do not believe that there is any such thing as ‘objective’ research in general though. One’s positionality informs the way we do research – what questions we ask, what frameworks we use, what argument we make. Objectivity and rationality are false terms used to regulate marginalized communities.

The theories on power and hierarchy that I study inform my daily activist work. The writing and research I do I make accessible in order to reach and engage with marginalized communities without higher degree. So much of academia is elitist and bound by gatekeeping/ers. I am working to dismantle that.

Many prominent vegan activists are queer, such as Dr. Breeze Harper and Aryenish Birdie, but haven’t written much about their LGBTQIA+ identities. Christopher Sebastian was the first writer I found who was open on the intersections of homophobia and transphobia, but you can also find articles on this topic written by RR Simonsen, who published the Queer Vegan Manifesto, Leah Kirts who wrote “Coming Out as Vegan” and Clou Hamilton who runs the blog Vegan Sex and Politics. pattrice jones who founded the LGBTQIA+ farm animal sanctuary, Vine Sanctuary, is also a great resource.

You are the co-editor of the book Queer and Trans Voices: Achieving Liberation Through Consistent Anti-Oppression. Why did you feel it was necessary to make this book?

For me, being vegan and queer had been inexorably linked. I started exploring my queer identities and got involved in animal right activism around the same time. In high school, I was bullied more for being vegan than being queer, which also made me think about what makes people be seen as ‘Other.’ Primarily, though, I knew I wanted to provide a space for marginalized activists to similarly think through how their identities are connected and argue that not only should vegans care about queer liberation, but also that LGBTQIA+ activists should fight speciesism.

In your guest post on Crip Humanimal and in previous work, you use the term ‘cisheteropatriarchy’ and describe it as “a structural system that oppresses women and gender/sexual ‘Others’ in order to empower straight cis (white) men”. Can you elaborate some more? How does this relate to the oppression of disabled people, and of other animals?

Cisheteropatriarchy is embedded in our institutions and prioritizes the experiences and needs of white cis heterosexual men over other folks. It sets this man as the normative, the rational, the ‘right’ and harms, targets, oppresses, and criminalizes all those who are deemed ‘Other.’ Cisheteropatriarchy is deeply intertwined with other structures of violence like ableism and speciesism. Until all hierarchies and systems of domination are broken, true liberation cannot exist.

‘There is no ethical consumption under capitalism’. This is sometimes invoked to dismiss the vegan ‘lifestyle’ as futile. What are your thoughts?

I saw a post the other day about that phrase that stated that it was not an inditement of veganism, but of capitalism. Working towards dismantling capitalism and working against speciesism and engaging in vegan politics are not mutually exclusive to me, but both incredible necessary.

Do you consider yourself more of a vegan / animal rights activist or more of a disability advocate? Or a queer activist? Or does it largely overlap?

I found my queerness through my veganism. I’ve written that “being vegan in my high school was a very queer experience” because I was bullied and ostracized for my activism and diet. It was through this experience of being ‘Othered’ that I found home in identities like straight edge, queer, and feminist. Now I can’t distinguish my queerness from my disabilities from my veganism. They’re all part of who I am and all tools I use to subvert and challenge hegemonic power structures.

Is there ableism and queer discrimination in the vegan/AR community? If so, can you give some examples?

Very much so. It has been very difficult for me to be open with my disabilities and queerness and still be employable. At most of the vegan organizations I’ve worked with, I decided to remain closeted for safety and security. When I have been out, I have faced many microaggressions. At one organization, when I asked if I could put my pronouns in my email signature it started months-long process where employees were threatened with termination if they did so before a new procedure was put in place. I have left organizations because of transphobia. I have been told that ‘I wouldn’t be happy’ in organizations because of their ‘DEI policies and culture’ which has led to my unemployment. When I put my pronouns on my CV I don’t get interviews. I was pressured at one organization to canvass in a city at night (if I didn’t agree I ‘wasn’t doing enough for the animals’). When I was sexually assaulted, the organization went to its lawyer for damage control because they had already faced negative media for #metooAR.

It has been very difficult for me to be open with my disabilities and queerness and still be employable. At most of the vegan organizations I’ve worked with, I decided to remain closeted for safety and security.

The DEI work that many organizations are doing currently are just performative actions for donors. The cultures at these organizations are very toxic and have harmed employees and external communities. When they face internal critique, the workers are considered ‘rabble rousers’ and threatened with termination. Marginalized employees are expected to do an immense amount of free labor to teach white cis folks about oppression and power, to be tokenized as the ‘diverse’ face of the organization, and be polite when assaulted with microaggression after microaggression.

How can we achieve ‘total liberation’? I know this cannot simply be answered in a paragraph, but if you should have to pick out some strategies or actions where the movement can improve, which would it be?

– Interviews Crip HumAnimal – I particularly welcome stories of disabled LGBTQIA+ vegans, BIPOC vegans, vegan women, or other oppressed and marginalised groups, to highlight their specific experiences and the interconnections of oppressions –

0 comments on “On being a queer, neurodiverse, animal activist and scholar in Baltimore. Interview with Z. Zane McNeill”