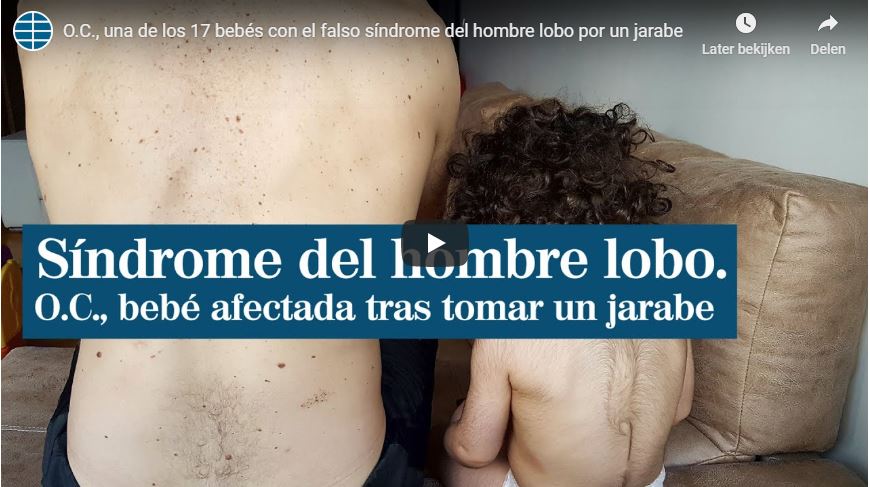 More than a dozen children in Spain developed a form of “werewolf syndrome” after they were given mislabeled medication. Seventeen cases have been reported in Cantabria, Valencia and Granada.

They were treated with medication for a stomach condition, but the medicine contained a drug used to treat alopecia or baldness. The medicine labeled as omeprazole to treat acid reflux, appeared to contain minoxidil, an ingredient that stimulates hair growth.
The children who took the mislabeled medicine, began growing hair all over their bodies, a rare condition known as hypertrichosis, also referred to as “werewolf syndrome“.

The laboratory was eventually shut down and the medicine taken off the market. The hair growth in the children will disappear over time, although it is unclear what effect taking the drug may have on the children’s general health.

Video from El Mundo [preview: two persons sitting next to each other on coach, with their back to the camera. One adult, one child. The back of the child has excessive hair growth]

I some cases, hypertrichosis is caused by a genetic mutation and present from birth.
Petrus Gonsalvus was born in 1537 in the Canary Islands, and he was the first person in recorded history to have hypertrichosis. It is believed that his life was inspiration for folktales about a bride with an ‘animal’ groom, and eventually also the Disney classic Beauty and the Beast.
People with hypertrichosis were often displayed in circusses and road shows in the 19th and early 20th century (the so-called ‘freak shows’).