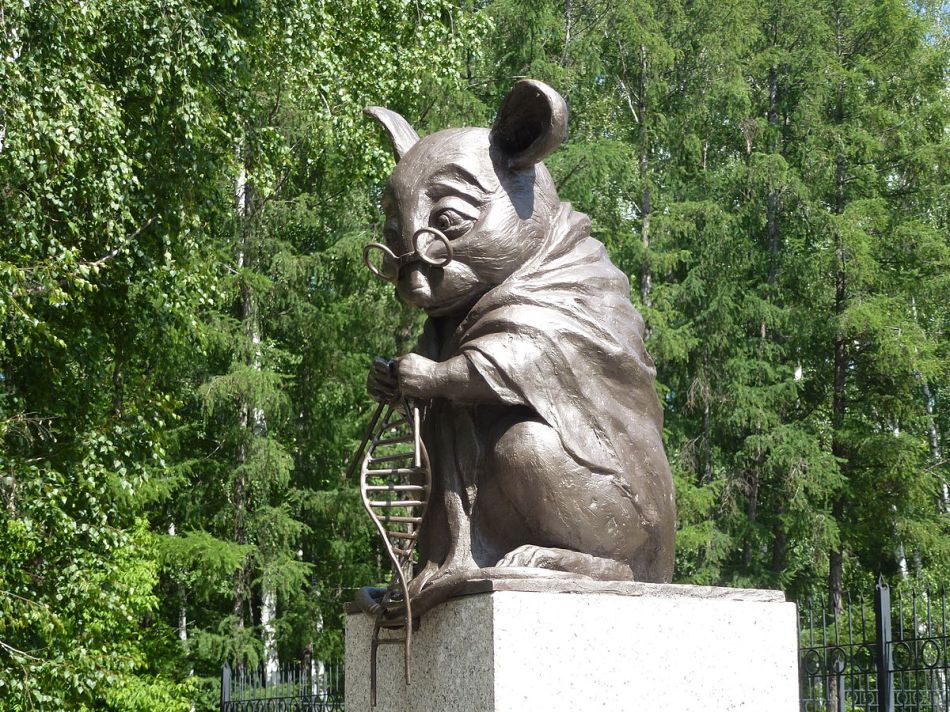 The Monument to the laboratory mouse is a bronze figure of a mouse, wearing a cape, looking down and knitting a DNA-helix. The statue depicts “an anthropomorphic mouse as an elderly woman, complete with glasses balanced atop its [sic] nose“.1

The statue is made by sculptor Alexei Agrikolyansky, and is located in a park in front of the Institute of Cytology and Genetics of the Russian Academy of Sciences (Novosibirsk, Siberia, Russia). It was completed in 2013, coinciding with the 120th anniversary of the founding of the city. Nikolai Kolchanov, the director of the institute, says that “the monument commemorates the sacrifice of the mice in genetic research used to understand biological and physiological mechanisms for developing new drugs and curing of diseases“. 2

Artist Andrey Kharkevich, who designed it, describes the statue: “Here, the images of a laboratory mouse and a scientist are combined because they are connected to each other and serve one cause. The mouse is shown at the exact time of scientific discovery. If you peer into its [sic] eyes, you can see that this mouse has already invented something. But the whole symphony of scientific discovery, joy, “Eureka!” has not yet sounded.”3

The Institute says it hopes to create more displays to ‘honour’ other laboratory animals, along with plaques containing information on exactly how each animal has helped humanity. 4 The institute has for example done and is still engaged in a long-running study on animal domestication, and bred more than 40 generations of wild silver foxes, documenting their extensive physical and behavioural changes. So perhaps a monument to the fox will one day join the knitting mouse.5

The honouring of laboratory animals is a way of easing one’s conscience. To deal with the cognitive dissonance arising from the use of animals in experimentation.

I wrote about this ‘Mouse statue’ in ‘The animals do not want our statues and medals’ 6. The ‘lab mice’ are described as having served a higher purpose. They have ‘helped’ humanity. It is almost described as if they have volunteered and signed up themselves to happily serve their life as a ‘laboratory animal’.

No animal is born as a laboratory animal. It is a classification given to them by humans, to serve a purpose, designed by humans.
I believe the honouring of laboratory animals is a way of easing one’s conscience. To deal with the cognitive dissonance arising from the use of animals in experimentation.  You see, we do respect them. We are so grateful to them that we even give them a statue. And frame the animals’ death as if they willingly devoted their lives for the benefit of science, for humans.

The rats, mice and millions of other animals who are used, abused and killed each year in the name of science, couldn’t care less about the monument! If we would truly respect their rights, they would not be sacrified as ‘lab animals’.

LINKS1  This Russion monument honors the humble labmouse (Smithsonianmag)
2  Taken from the Wikipedia entry: Monument to the laboratory mouse
3  Ibid.
4  Russian scientists build monument to honor lab rats (Buzzfeed)
5  Ibid and A monument to laboratory rats and mice (boingboingnet)
6 The animals do not want our medals and statues
See also (in Russian): https://sib.fm/news/2013/07/01/pamjatnik-laboratornoj-myshi

I started Crip Humanimal at the end of 2018.
This is TOMORROW!!
In a vegan group ...
Orthopedic support for other animals.
Do you sometimes volunteer at an animal sanctuary? Are animal sanctuaries accessible for disabled people? Do you want to share your thoughts?
Podcast serie by Think Like A Vegan! 👏💚